Phil Davis can certainly understand why Olympic gold medalist and NCAA Division I champion Gable Steveson would sign on with WWE.

Davis (22-6, 1NC), himself an NCAA Division I champ in 2008, went on to pursue a career in mixed martial arts, making it into the upper echelon of the UFC’s light heavyweight division. He then signed on with Bellator MMA as a free agent in 2015, earning the promotion’s 205lb title the following year.

Pro wrestling, however, comes with a rabid, dedicated fanbase, and that’s a major upside according to Davis.

“I think he did the right move. For a number of reasons,” Davis told Cageside Press in an exclusive interview recently, just as news was breaking that the Olympian had opted to pursue a career in Sports Entertainment. Steveson had spent time at UFC and Bellator MMA events, before ultimately selecting Vince McMahon’s outfit.

Where MMA sits today, or more accurately combat sports at large, said Davis, there’s a clear upside “if you’re a big name and you can bring eyes to the sport. And the pro wrestling crowd, they’re fanatic. They’re another level. Even when Brock Lesnar decided to make his debut in MMA, what we saw was not like an average person’s first fight in the big show. What we saw was as if somebody who was the former champion stepped away for a week or two and came back against an up-and-coming opponent. We saw that level of fan interaction.”

Asked if he’d ever considered crossing over to the scripted sport, Davis had to pause. “Those guys, they get beat up pretty good. It’s not that I wouldn’t try it. It might be something, it might be something I’d be interested in. But man, those guys take a beating,” he went on to say. “I like it though.”

Of late, Davis, one of Bellator’s more colorful personalities, has been mostly absent from Twitter. It’s a trend that has been seen over the past year if not more: athletes opting to pull back from the social media site. Some in favor of competitors like Instagram, others just opting to spend less time on social media period.

“I do like Twitter. I like it. However oh man, it requires so much of me. It asks so much of me,” Davis said of the website. “If I just tweeted out my phone number, you’d say ‘Phil do what you like, but that might have been a stupid move. It might give you more messages and phone calls then you probably want.’ In the same way, Twitter, it’s great to converse with the world stage, but it’s a lot to keep up with.”

Davis also noted another issue with the site, one that has plagued social media in recent years. “Especially now, you’ve just got to be careful not to offend people. You want have fun, you want to be likeable, you want to have a good time but at the same time the line can be blurry, and it can be crossed quite quickly.”

Davis is due to headline Bellator 266 in just over a week’s time against the debuting Yoel Romero. It’s not the promotion’s first attempt to book the former UFC title challenger in a fight; a previous effort against Rumble Johnson fell through when Romero couldn’t pass his medicals.

Despite that hiccup, Davis has no concern about Romero not making it to their fight. “None. None. I don’t have any concern at all,” he told us. “I think sometimes these things happen. Life’s life sometimes.”

As for the fight itself, Davis referred to it as “a great opportunity.”

“This is why I got into a sport like this. Wrestling through a wrestling tournament is tough, it’s difficult. But the match that you really want to be in is the final,” explained Davis. “And that’s what this is. This is a big match. This is a big fight. So I’m super excited about it. It’s nice to be part of his Bellator debut.”

Phil Davis takes on Yoel Romero in the main event of Bellator 266, live at the SAP Center in San Jose, CA on Saturday, September 18, 2021. The main card airs live on Showtime in the U.S.

Want to hear more from Phil Davis? His Bellator 266 media day scrum is below! 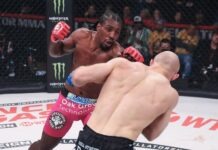 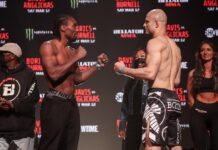