A pair of top 15 UFC flyweights will collide in December.

On Wednesday morning, No. 15 ranked Montana De La Rosa told MMA Junkie that she will be fighting No. 13 ranked Maycee Barber on December 11 at UFC 269.

Barber (9-2) snapped the first losing streak of her career in her last outing, which saw her win a very controversial split decision against Miranda Maverick. Every single media member scored the fight for Maverick. Before her most recent win, she lost a unanimous decision to Alexa Grasso and another unanimous decision to Roxanne Modafferi, where she, unfortunately, tore her ACL.

De La Rosa (12-6-1) also got back into the win column in her last outing. In June, at UFC Fight Night: Rozenstruik vs. Sakai, she finished Ariane Lipski, picking up her first TKO win. Four months prior, she fought to a draw against Mayra Bueno Silva.  De La Rosa went 1-1 in 2020, defeating Mara Romero Borella but then losing to top prospect Viviane Araújo to end her year.

No location, or venue has been officially announced for the December 11 pay-per-view event. However, Charles Oliveira vs. Dustin Poirier is targeted to headline.

UFC 269 currently breaks down as follows: 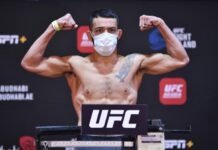