Things did not go Eduard Folayang’s way in the main event of ONE Championship’s Battleground II on Friday.

The card was topped by Folayang and former UFC/TUF veteran Zhang Lipeng, making his debut for the promotion. Folayang, a former lightweight champion, was badly in need of a win to start the night, having amassed a record of 1-5 across his last six fights leading into Battleground II.

It didn’t get any better for the Filipino fighter in his latest outing. Instead, newcomer Lipeng went the distance with the ex-champ, earning the unanimous decision in the three-round main event.

Full results from ONE Championship: Battleground II plus a gallery of highlights can be found below. The promotion’s next card, Battleground III, takes place on August 27. 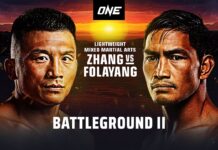