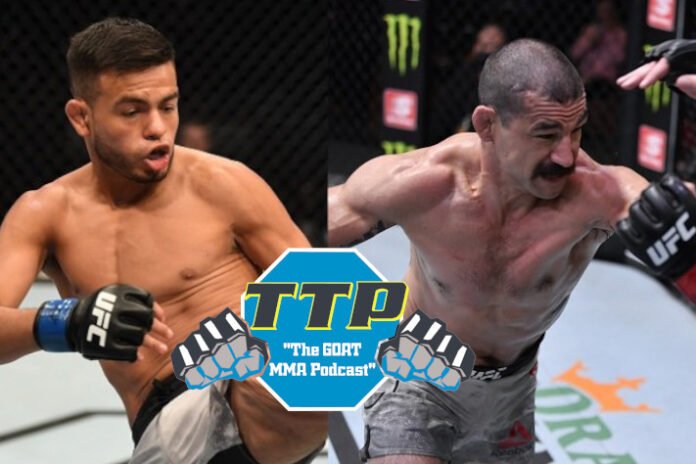 To kick off this week’s edition of the Top Turtle Podcast, Brandon Royval stops by to talk about all kinds of things. First, he digs into the injury that ended his bout with Brandon Moreno. He talks about how it had happened all the time and how he tried to put his shoulder back into place mid-fight. He then shares the recovery and how this was probably all for the best. Now he sets his sights on taking out Alexandre Pantoja in violent fashion and how he thinks doing so will earn him a rematch with Brandon Moreno – which is a thought that gets him out of bed in the morning.

Gumby and Shockwave didn’t have any fight breakdowns to bring you this weekend, so instead they’re discussing the ones they’re most hyped on. Of all the fights that are officially announced for the end of 2021, Gumby and Shockwave each give you their top 3. Do they share any of their choices? Do they share all of their choices? I guess you’ll have to listen and find out.

Finally, the episode ends with veteran of the sport Vinc Pichel. He talks about the circumstances that led him to change his nomadic training style to one with a full-time head coach busting his butt. Plus, he details the move to Factory X and the thought process that led to Marc Montoya being that butt-buster. He also shares how the move has not only gotten him much better, but has him feeling like a young buck again. That feeling has him rethinking the goals of his career, and not in the way you’d imagine for a nearly 39-year old fighter.