UFC 265’s featured preliminary card fight pitted surging striker Rafael Fiziev against Bobby Green — who, were it not for a loss to Thiago Moises back in October, might have had a claim to Fighter of the Year in 2020.

As it was, there was plenty of anticipation for Fiziev vs. Green. Still early in his UFC career, Fiziev was gaining a reputation as a fighter that always brought violence to the cage. Green, dating back to his Strikeforce days, had spent a decade in the majors, and nearly a decade in the sport of mixed martial arts.

Fiziev appeared to almost float he was so light on his feet in the opening minutes of his lightweight fight against Green. He got his hands going in the first half of the round, with Green egging him on despite several blows landing. Green found success as well, landing his left hand, and never giving the same look twice.

What was unquestionably a fun fight for anyone watching continued to play out in the second. Green, as was his norm, fought with his hands low, relying on speed and head movement to avoid Fiziev’s attacks. Fiziev targeted the body, landing a kick; Green returned with a kick of his own. But it was Fiziev cracking Green with a right hand that had the crowd roaring in response; the Muay Thai expert followed up, but Green managed to escape. Moments later, Fiziev connected again, but once again Green survived.

In the final minute or so of round two, with the crowd at the Toyota Center chanting his name, Bobby Green began going toe-to-toe, strike-for-strike with Fiziev, turning up the heat. They’d finish the round in what was a clear Fight of the Night favorite.

Round three saw Fiziev hit home with a number of punches early on. Green, with his hands still down, ate them, jawed a little, and carried on. While Fiziev had held the advantage in volume early in the fight, Green was quickly closing the gap. Fiziev had slowed a little, whereas Green had clearly not. Both, however, had enough in the tank to swing right to the end of the fight. 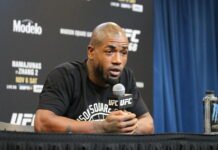 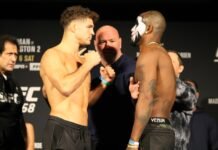