Coming off the biggest win of her career, ONE Championship atomweight Bi Nguyen has been booked onto ONE’s upcoming Battleground III card.

The event, which will air live on August 27, will see Nguyen taking on Team Lakay athlete Jenelyn Olsim. ONE Championship officials confirmed the news to Cageside Press following an initial report by MMA Fighting.

Nguyen’s split decision victory over Indian star and Commonwealth Wrestling Championship gold medalist Ritu Phogat was unquestionably an upset. Phogat, then undefeated, was expected to be a shoo-in for ONE’s women’s atomweight grand prix. Opting to take the fight against Nguyen prior to the tournament, originally slated for late May and now postponed to September, Phogat came up short short against the “KillHer Bee.”

For Nguyen (6-6), the victory marked her second under the ONE banner, not counting a Muay Thai win against Puja Tomar in 2019. It also snapped a two-fight losing streak.

Olsim (4-2), from The Philippines, previously competed for WSOF, before fighting twice under the ONE: Warrior Series banner. Her last fight, at Fists of Fury III, saw Olsim pull off a third-round guillotine choke against Maira Mazar.

ONE Championship: Battleground III is also expected feature a featherweight Muay Thai contest featuring two of Thailand’s best in Sitthichai vs. Tawanchai. The event goes down in Kallang, Singapore at the Singapore Indoor Stadium. 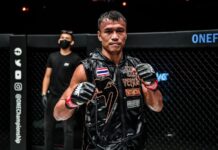 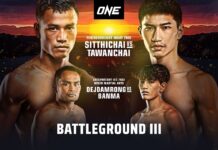 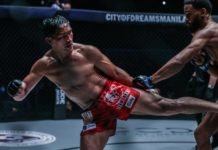