Las Vegas, NV — Jared Gooden didn’t have a game plan going into his short-notice fight at UFC Vegas 33 on Saturday.

With his job most likely on the line, Gooden (18-6) showed up and knocked out his opponent Niklas Stolze in the first round, needing a little over a minute to do it. Coming into the UFC, Gooden racked up 13 finishes on the regional scene. However, he wasn’t able to show off his finishing ability as he went to a decision his first two trips to the octagon, losing both.

Saturday, he was able to show the UFC fanbase that he has dynamite in his hands, and he was quite happy about it.

“Oh, I showed ’em today. I’m glad ya’ll got to see it. Look forward to more coming,” Gooden told Cageside Press and other media members during his post-fight interview. As far as a game plan, there wasn’t one. “I had no game plan, man. It was just like whatever comes may come, just go.”

“Nitetrain” took the fight on less than five days’ notice. On the day of the fight, there was a report that his fight with Stolze was off due to COVID-19 protocols. Thankfully the doctors cleared both fighters.

“I don’t know [what happened]. Like, it’s funny, I was literally sleeping, and my coach came to wake me up, and I was like, ‘what’s going on?’ We had to go downstairs, ask people, call my manager, all sorts of things were going on, but I knew in my mind that this fight was going to happen. So, I’m just happy to be out here and get to show the fans what they want to see,” Gooden said.

At 1-2 in the UFC, Gooden didn’t call anyone out because he said they keep ignoring him. He wouldn’t give a name because he “didn’t want to start any sh*t.” However, he does want to keep active and fight every three months.

“I told the UFC and Sean Shelby I’m ready to come back every 90 days. If sooner, I will. I’ve called out a lot of people, and a lot of people have ignored me, so I’m not going to call out anybody because it seems like they’re going to keep ignoring me. So I’ll just take whoever’s going to fight me,” Gooden said. 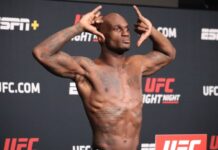