Los Angeles, CA — Fresh off a first round finish of Patricio Freire at Bellator 263, newly crowned Bellator featherweight champion A.J. McKee is ready to take on any and all 145-pounders regardless of promotion.

“He’s [Freire] the best 145-pounder. Was the best. I’ve pretty much been saying it, people are seeing it, people are believing it. I am the best 145-pounder in the world. Whether it’s UFC, ONE FC, PFL I don’t care who it is. I got a million dollars cash in my bank. I’m willing to put that up against anybody else. I’m sure Showtime, Bellator, they’ll match it. Let’s do some super fights, let’s get some big stuff going, change the sport. We can do it, unify these belts,” said McKee during Saturday’s post-fight press conference at The Forum.

McKee’s championship win may have been a surprise to some but not to him.

“It’s been 22 years in the making so man to do it the way I did it. I said I was going to do it in a stylish fashion you know. Done and won. When I rocked him I was just like, ‘That’s it.’ I just knew it, after the head kick I hit him with that uppercut and….I don’t know, I saw him quit. He didn’t need anymore but like the ref says don’t stop punching until I tell you to,” McKee told the press.

“Honestly I dreamt the fight. I knew I won the fight. I prayed about it and same night I had a vision. So I knew I had victory but it wasn’t the dream that I had which is peculiar. Looking into it now maybe that’s the 155-pound title that I saw.”

Bellator 263 was held at The Forum in Inglewood, CA which is not far from his hometown of Long Beach. The support for McKee was evident from the very beginning of the card all the way through the main event. McKee himself was not surprised at all.

“Nah I knew it man. I sold more in tickets than I got paid. I knew this whole arena was there for me but it’s just phenomenal to be, to have that much support. The only thing that could compare to that was when Ilima-Lei fought in Hawaii and I was on her card. So I knew what kinda to expect from the crowd. It was just surreal man to have all those people there just behind you. Doing it not just for you, your family, yourself but for the city. It’s just a blessing.”

So what’s next for the newest star in Bellator? History.

“Champ-champ. Technically these are won. So for me to make this become too. That’s the next step. Being at 145-pounds isn’t the easiest, maybe we get some super fights going. I’m pretty much done with the division at 145-pounds. Hop up to 155-pounds (next).”

Watch the entire post-fight scrum from A.J. McKee above and keep it on CagesidePress.com for more from Bellator 263. 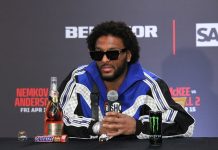