TUF 29’s latest episode, entitled Clocked, opened with Brian Ortega and his coaches being late to their own practice. Ortega’s tardiness has been a sticking point throughout The Ultimate Fighter 29 season, and while his own team said they’d come to accept it, featherweight champion Alexander Volkanovski called it what it was: unprofessional.

Responding with a prank, Volkanovski filled the opposing coach’s room with clocks. As pranks go, it was pretty on the nose, and generally harmless.

Then it was on to the first bantamweight semifinal, featuring Ricky Turcios and Liudvik Sholinian.

“Since I was a young boy, I’ve dreamed of these moments,” Turcios said ahead of the semifinal scrap. He speaks of testing his style of martial arts against his opponent’s.

“I don’t see his face. I’m ready to do anything to win,” Sholinian countered, in his own segment.

With the first three-round bantamweight semifinal underway, it was Turcios landing a nasty leg kick early. He was the more active fighter to start, circling, bouncing on his feet, throwing kick after kick and flashing a jump knee. A front kick and low kick followed, and Sholinian appeared stuck in first gear in comparison.

Turcios also found success in clinches along the fence, controlling the action and pinning his opponent. While he didn’t land the takedown, that control time didn’t hurt. At the end of the round, Turcios had Sholinian under heavy fire.

Between rounds, Liudivik Sholinian complained of a head butt that had resulted in a cut. His corner urged him to be more active, something of an understatement. It was Turcios who came out firing however, backing Sholinian up. Sholinian then changed levels, landing a picture-perfect takedown to get the momentum on his side. Turcios began throwing elbows from bottom, and had soon scrambled out and up to his feet. Before long though, the pair were back down, with the rest of the round featuring some slick transitions and scrambles, up until the final thirty seconds. Turcios finished the round landing right hands.

Round three had Sholinian in need of a finish. But on the feet, he was outgunned. Soon enough, Turcios had him backed up to the fence, though he would take a warning for having his fingers extended. Under fire, Sholinian egged his opponent on, but he was losing the round. Turcios was landing the harder shots, landing more volume, and mixing in elbows. Sholinian did land more in the third, bloodying Turcios, but the outcome was never really in question. The final minute was a stand-and-trade affair, with Turcios pointing to the floor, and Sholinian obliging. No doubt the best fight of the season, with a little bit of a Griffin vs. Bonnar feel to it.

There was zero surprise when Ricky Turcios was announced as the winner, but UFC President Dana White gave props to both fighters. When all is said and done, it wouldn’t be a surprise to see Sholinian get a shot in the UFC at some point as a reward. 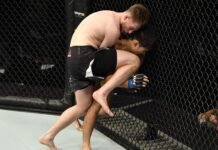 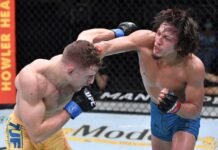