Bellator MMA is set to return to London, and when it does, it’s bringing a blockbuster main event with it.

Lima has the distinction of being the only man to defeat Michael “Venom” Page, a knockout that came during the welterweight grand prix in 2019.

Since that time, Page has gone on to win five consecutive fights, most recently scoring a TKO victory via doctor’s stoppage against Derek Anderson.

Lima, meanwhile, has lost his last two fights, and his 170lb title. In October 2020, “The Phenom” failed in his bid to claim a second belt, at middleweight against Gegard Mousasi. His return to welterweight earlier this year didn’t go as planned either, as Yaraslav Amosov won a unanimous decision, leaving Lima beltless.

The October 1, 2021 Bellator London card will take place at the SSE Arena, Wembley and air on Showtime in the U.S., and the BBC iPlayer in the U.K. Fans will be back in the building for the show. The event’s full card as announced can be found below. 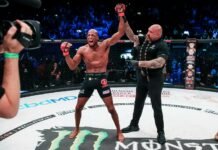