Las Vegas, NV — Raulian Paiva’s run at flyweight is over, and he is going up to bantamweight, where he started his career.

After four fights at 125lbs, Brazil’s Paiva is moving up a weight division to 135 full time. He missed weight for the first time in his 23-fight career last year against Zhalgas Zhumagulov at UFC 251 on ‘Fight Island.’ He wound up winning a unanimous decision, but the writing was on the wall. Paiva was scheduled to face David Dvořák in May but pulled out of the fight a day before the event due to an illness stemming from his weight cut.

With weight cutting negatively affecting his career, the Brazilian needed to make a change. Paiva was asked during the UFC Vegas 32 media day if he was going back to flyweight after his fight with Kyler Phillips on Saturday.

“I’m going to be fighting 135,” Paiva said through an interpreter on Wednesday. “That’s my division, to be honest, if you check out my Sherdog [record]. So I’m going to keep fighting 135, no more 125 anymore.”

Paiva will be leaving his No. 12 flyweight ranking as he moves up in weight, although he has a chance to take Kyler Phillips’ No. 14 bantamweight ranking if he were to get a victory.

He was happy the UFC gave him the opportunity to fight Phillips as a short-notice opponent.

“For me, it’s perfect because I want to make my name in this division, and the best way is to fight people in the rankings. So, I’m very thankful for the UFC,” Paiva said. 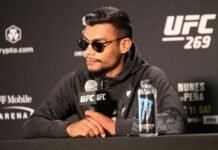