Las Vegas, NV — There have been some truly fantastic knockouts in 2021, but the consensus pick is Cory Sandhagen’s flying knee at UFC Fight Night: Overeem vs. Volkov. He agrees.

In February, Sandhagen knocked former lightweight champion Frankie Edgar out cold with a flying knee that silenced an already silent arena. With other knockouts such as Karmau Usman knocking out Jorge Masvidal or Derrick Lewis knocking out Curtis Blaydes, Sandhagen’s knee seems to be the consensus pick through seven months.

When asked at UFC Vegas 32 media day if he agreed with the consensus, he certainly did.

“I haven’t seen every single fight though but I’m always going to be on my side versus anyone else’s so yeah, I got the KO of the year,” Sandhagen told Cageside Press on Wednesday.

There is also a meme of Cory Sandhagen appearing sad after the knockout that also went viral. When asked about also having the meme of the year, he said he’d prefer KO of the year but he will take all of the awards so the meme award is good too.

Sandhagen sees himself in his second main event in nine months this Saturday at UFC Vegas 32. He faces another former champion, TJ Dillashaw, who is coming off a two-year suspension. Both fighters see this fight as a No. 1 contender fight and Dillashaw even sees it as an unofficial title fight.

“One of the main motivators behind me asking for a fight with TJ was him and [Petr] Yan were going back and forth a little bit and I remember Yan saying that if he beats [Aljamain] Sterling then he wanted someone with name value. So it’s just about taking out anyone else’s argument that’s kind of how it’s always been since I lost against Sterling. That’s what I’m going to do until I get my title shot,” Sandhagen said. 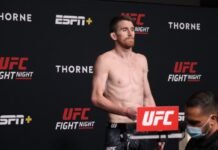 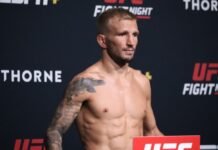 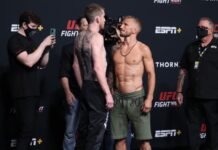