“I guess those big moments, when I started fighting, I imagined I would get to the top,” she told media outlets including Cageside Press, following a third-round TKO of the retiring Reneau. “But when I stopped, I never thought I would be right back here.”

Tate described the place she’s now in as happy and at peace, such a different experience than some of her past outings. “I feel like this is how it’s supposed to be.”

It’s been over four years since Tate last fought, the longest stretch between match-ups for any female UFC fighter. That said, she didn’t feel any ring rust, the ex-champ stated.

“It was like riding a bike,” said Tate. “I feel like I just went. I got a little emotional on the walkout. I did. It was about halfway through, and I remember I felt like I was almost going to cry tears of joy.” Her comeback fight was a year in the making, if not more, she revealed. “Even a year ago, I had just made the decision that I was going to fight again. I had just had my son. Now it’s here. This is my moment. I got a little emotional there. But it was a good kind of emotion.”

With a big win comes the “what’s next?” sort of questions, but despite the victory, Tate doesn’t want to rush the comeback process. “I want to let this victory settle. I don’t want to be in a rush for anything. But of course I’m a women on a mission here. I do want to get to the top. I think a fight by the end of the year is reasonable.”

Tate also explained that she didn’t feel pressure heading into her return. “I didn’t feel any pressure this time. I just felt very grateful to be in the position that I was in,” Tate said. “And truthfully guys, this is why I couldn’t stay retired. I could not stay retired, because I felt like I had so much more to give, and there’s truly a better version of myself. And I didn’t want to leave thinking that I hadn’t put my best foot forward.”

With Tate’s high profile, there’s always a chance that she could wind up fast-tracked to a rematch with Amanda Nunes, assuming Nunes retains the belt this September. That, however, will only happen if Tate feels the time is right. “I’m just going to do what’s right for me. This is the first time I can say in my life that I’m the CEO. There’s nobody else making decisions.” All those around her are there to support her dreams and her goals, Tate continued. “So if it feels right, yeah, we’ll do it. But I’m not in a rush. When I do fight for the title, whoever that may be, it will be the right time. And we’ll make sure that we’re ready. We’re not going to rush anything, but we won’t miss any opportunities either.” 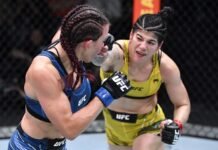 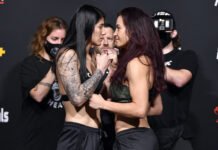