Las Vegas, NV — Max Holloway is a curious onlooker at UFC 264 this weekend. But he was almost a backup fighter for the main event.

Prior to a recent injury, “I was actually one of the replacements for this fight,” Holloway, the former featherweight champ, revealed following Friday’s official weigh-in. “I was going to be here this week, weighing in and doing everything before our fight that was supposed to happen next week. It’s insane.”

Instead of Holloway, Rafael dos Anjos weighed in Friday as a backup for Conor McGregor vs. Dustin Poirier.

Holloway was expected to fight Yair Rodriguez in a week’s time, but is currently nursing a sprain and undergoing physical therapy. As for who he’d rather have fought, Conor McGregor or Dustin Poirier, Holloway replied with “I want to fight both of them. I want to fight both. Both of them is a fun fight, both of them is a great fight. I can’t wait. At this level, the margin of mistake is very small. Very small. You take one step too fast, you get caught with something. You take one step too slow, you get caught with something.”

Ultimately, Holloway sees the UFC 264 main event as “a fun fight. And usually when Conor is on the bad side of something, he gets what he wants. So all respect, all power to him. Super excited for it.”

Breaking down the fight, Holloway noted that “at the end of the day, everybody’s talking about the leg kicks, and they think the leg kicks is the big thing. But Dustin actually took down Conor. And I would say Conor’s takedown defense was much better against Khabib [Nurmagomedov] than Dustin.”

Watch the full UFC 264 media scrum with Max Holloway above. 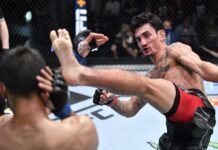