Carlos Felipe has seen his wish fulfilled, and will fight “The Pitbull” in October.

On the Canal Encarada Podcast, Felipe announced that he will be fighting Andrei Arlovski on October 16 at a yet-to-be-announced UFC event. Both fighters would confirm the booking on social media.

Felipe (11-1) is coming off a split decision win over Jake Collier at UFC 263 last month. After the fight, in his post-fight interview, he called for a bout with Arlovski, saying that the fight made sense. Well, he’s got it. After dropping his UFC debut, the Brazilian is riding a three-fight win streak and is on the verge of a top 15 ranking.

Arlovski (31-20-2) got back into the win column in April when he defeated Chase Sherman via unanimous decision. Before defeating Sherman, he had a two-fight win streak snapped when Tom Aspinall submitted him at UFC Fight Night: Blaydes vs. Lewis in February. Arlovski won both of his fights in 2020, against Philipe Lins and Tanner Boser.

No location, venue, or broadcast details have been announced by the promotion for the October 16 UFC event. Additionally, no main event has been announced. 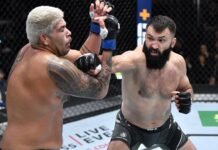