GLENDALE, AZ – Carlos Felipe defeated Jake Collier via split decision at UFC 263, and he already has his eyes on his next opponent, like he usually does.

“Two names. First, Andrei Arlovski. I think the fight makes all of the sense because, first I have all the respect for him but I think his time is done,” said Felipe, speaking to media outlets including Cageside Press backstage in at the Gila River Arena. “I think it is my time now; the new generation. The UFC has put him with some guys that are in the new generation, so I think the fight makes all the sense.”

Then, there’s another name, Felipe revealed during his UFC 263 post-fight scrum. “The second is Greg Hardy. Greg Hardy is personal, I don’t like him. I would love to fight him.”

With Hardy fighting Tai Tuivasa at UFC 264, Felipe had the chance to say that he doesn’t like the Australian either.

When asked why, the Brazilian said they interacted on social media after Felipe beat Justin Tafa earlier this year.

“When I beat Justin Tafa, he came to my Instagram to say some things, but I think it’s for promotion, and it’s not personal. Greg Hardy is personal.” 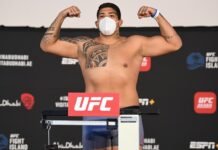