Roland Dunlap is an undefeated middleweight prospect with a 2-0 professional record. The 28-year-old out of Milwaukee, Wisconsin trains with Roufusport alongside fighters like Emmanuel Sanchez, Raufeon Stots, Brendan Allen, Gerald Meerschaert, and many more top talents. The 6’3″ wrestler has been active in MMA since 2015. He built up a 6-1 amateur record before he went pro in 2018.

A former US marine, before coming into MMA Roland Dunlap was competing in wrestling at a high level.  He won two state titles in high school and had a career record of 159-9. He went on to be a three-time All-American and wrestled D3 in the University of Wisconsin Whitewater — the same school former UFC and current Bellator star Corey Anderson went to. Along with that wrestling upbringing his father was a high-level karate black belt.  Dunlap has been around combat sports his entire life.

Even with his extensive wrestling background, you may be surprised to see him in the cage fighting out of a classic karate stance. “The Dream” fights very loosely and very long. He’ll throw a lot of kicks and he’ll attack with both legs, attacking each side of his opponent.  Fighting with his lead right leg forward he will create a lot of action with long straight punches, but it’s his left cross that is very sniper-like.

The problem with a lot of karate fighters is the way they hold their hands low and their chin in the air. Dunlap hasn’t fully mastered the karate style like Stephen “Wonderboy” Thompson has. He’s managed to not allow himself to get flustered when getting hit and instead seems to get even stronger.

Where Dunlap shines is when he uses his wrestling. Dunlap does nice work changing levels as his opponents come forward to engage. He sneaks under punches to get a hold of the legs to lift guys up and slam them to the mat. That showed in his last fight with a highlight-reel slam knockout, but he’s done that many times in his career. There may be some room for improvement when it comes to chain wrestling. He has so much success as a wrestler for a reason however, so even though it hasn’t shown completely, his wrestling seems legit.

If you date back to his amateur career, Dunlap’s sole loss is to Jamal Pogues. Pogues currently is a thriving light heavyweight prospect so there’s no shame in that loss.  Bringing the karate style and the wrestling he has to the table not only makes Dunlap a good prospect, but it makes him exciting to watch. 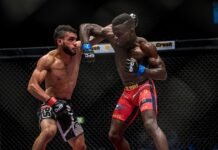