This week, we put the focus on our picks for the top five MMA prospects in action across the next several days. Among our top 5, an NJCAA National champ and LFA title holder, who is among four undefeated talents in action.

Peterson came into his MMA career with a background as a wrestler. He was a Minnesota State champion in high school and an NJCAA National champion at Iowa Central. Prior to his last fight, Petersen fought low-level competition. He did get his toughest test to date against veteran Vernon Lewis. Petersen ended up finishing Lewis in the first and won the vacant LFA heavyweight title.

Petersen has had no issue using his wrestling and landing ground and pound to send the ref in. Outside of that, he does have a one-punch knockout win. It’s still hard to tell how good he really is because his fights are ending so quickly. Petersen has never fought outside the first round as a pro.

Petersen is defending his LFA strap against a fighter with a similar 5-0 record in Waldo Cortes-Acosta. Cortes-Acosta does have three-round experience and fought once for Bellator. It’s a big fight for both where the winner probably gets a UFC opportunity. 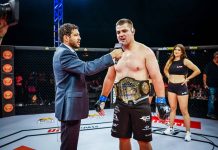