Simon Biyong expected to make his Bellator debut last year, against a big name. It wasn’t to be. “Melvin Manhoef, what can I say. I was disappointed, but at the same time, I remained patient and ready for the next opportunity.”

Biyong isn’t sure what the “real reason” for that fight falling through was. He heard the French boxing commission was involved, perhaps because Manhoef had too much experience in comparison to the 7-1 Biyong, a RIZIN Fighting Federation alum.

The next opportunity has arrived in the form of light heavyweight prospect Christian Edwards, however. It’s a short notice scrap for both men, who were previously booked opposite other fighters.

“I don’t think I had so much time to prepare for Christian Edwards. But at the end of the day, it doesn’t matter, because it’s a fight,” Biyong told Cageside Press during the Bellator 261 media day this week. “It’s two persons, two humans, two athletes who meet each other in the cage, and the better athlete will get the win.”

Edwards is an unbeaten prospect billed as a training partner of Jon Jones — the next big thing, frankly. That might seem like some extra motivation, and it might be, but Biyong is careful not to buy into the hype. 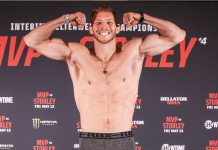