London – Another Bellator fight, another London card for light heavyweight Luke Trainer who takes on Simon Biyong on Friday night at Bellator 281.

Trainer (5-0) was set to fight in the U.S. but a surgery derailed that plan. Still, he wasn’t complaining about another fight in England.

“I’m glad i’m here. The original plan was to get into the states quick after the last fight, and then I had the surgery and that kind of postponed things. Once the Wembley put forward I was so down man. Back to Wembley, back to home soil. There’s plenty of time to get out to the states, but yeah fighting at home,” Trainer told reporters at media day.

Trainer takes on Biyong who has plenty of finishes on his record and has been involved in some tough bouts.

“I’ve got a war on Friday. It’s a battle of who’s the most savage. All I’ve got to worry about is bringing the most violence I can possibly bring, and that’s it. I don’t worry about the outcome. All I can control is me being as violent as physically possible,” said Trainer.

Biyong is slightly more experienced than Trainer, and that may be a factor come Friday night. Trainer knows he has a test ahead of him at Bellator 281.

Bellator has had a habit of building up fighters’ resumes with opponents that fans call “cans” or opponents who aren’t at the same level. Trainer wants none of that. Bellator will give their fighters a push, but Trainer wants to earn everything.

“I can fell the love for sure. They’re not feeding me, they’re not giving any easy matchups, but I’ve asked for that. I want to earn my salary. I just signed my second contract. The money that they’re paying me, for me, is life changing. So I expect to earn that salary. I don’t want any bums, I don’t want any cans,” Trainer said.

“Simong Biyong is a savage. I only want savages. I want to prove myself, I want to prove I’m the most savage in this division. I’m earning everything that they’ve given to me.”

Watch the full Bellator 281 media day appearance from Luke Trainer above. Trainer faces Simon Biyong in the light heavyweight division this Friday, May 13, 2022 as part of Bellator 281 at the SSE Arena, Wembley in London, England. 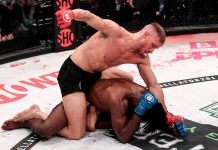 Bellator 287: Luke Trainer Was “Embarrassed to Be Me” After First Career Loss