The main event of UFC Vegas 29 pits The Korean Zombie, Chan Sung Jung, against Dan Ige to move up the featherweight ladder. Jung was recently halted in a number-one contender fight against Brian Ortega. Ige, on the other hand, bounced back from a loss to Calvin Kattar with a 22-second knockout against Gavin Tucker. Cageside Press was split at four picks apiece for the main event.

The co-main event features longtime veteran Aleksei Oleinik against Sergey Spivak. Oleinik has slowed down after his two-fight win streak, getting knocked out by Derrick Lewis and Chris Daukaus. Spivak has found his stride in the heavyweight division, winning three of his last four and knocking out Jared Vanderaa last time out. Oleinik was picked by five of eight writers.

Marlon Vera and Davey Grant will have a rematch five years in the making at UFC Vegas 29. Grant won by decision last time around, but Vera has looked great since then, going 9-4. Grant has been significantly less active, going 3-2 since the first fight, but he does come in on a three-fight win streak. Vera was unanimously picked.

Julian Erosa faces Seung Woo Choi on the main card. Erosa’s third UFC stint has been his best so far, as he’s 2-0 with a submission and a flying knee knockout. Choi had an unlucky start to his Octagon career, getting matched up with Movsar Evloev and Gavin Tucker, but he’s won his two fights since then. Erosa was unanimously picked.

Wellington Turman and Bruno Silva square off in a matchup of Brazilians. Turman is 1-2 in the UFC and has yet to fight this year. Silva lost in his first three Octagon appearances (one overturned due to his opponent’s failed drug test), but he is 2-0 since then. Silva was picked by five of eight writers.

Opening up the UFC Vegas 29 main card is Matt Brown vs. Dhiego Lima. The veteran Brown is 1-2 since coming out of retirement in 2019. Lima recently had a three-fight win streak snapped by Belal Muhammad. All but two writers picked Lima. 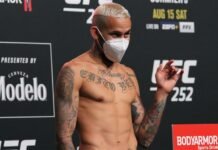