The featured preliminary card at UFC Vegas 29 on Saturday put light heavyweight prospects in the spotlight. Nicolae Negumereanu had made his promotional debut back in 2019, but the Romanian fighter had been sidelined throughout the coronavirus pandemic. Aleksa Camur, meanwhile, was looking to rebound from the first loss of his career.

It was Negumereanu getting the nod in this one, but not without controversy care of a number of unpunished fence grabs.

Negumereanu let out a scream to start round three. Camur missed on a front kick. Negumereanu landed a right hand and continued to walk down Camur. Negumereanu hit Camur below the belt, which halted the action. Camur tried for a takedown but failed. Negumereanu threw two hooks but missed. Camur landed a left hook himself, followed by a jab. A little over two minutes left in the fight, and Negumereanu stuffed another takedown. Negumereanu put Camur against the fence. Once again, there was a fence grab. Mike Beltran stopped the fight and gave Negumereanu a stern warning for grabbing the fence multiple times. with little more than ten seconds remaining, Camur landed a 1-2. It wasn’t enough.

In the end, Nicolae Negumereanu got back into the win column while Camur dropped his second fight in a row. Had the multiple fence grabs been penalized, the outcome would have looked considerably different. 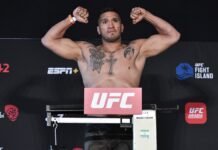