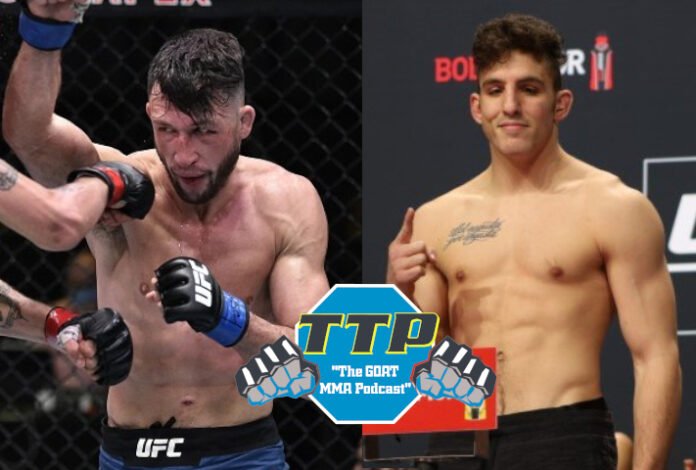 The ups and downs of any MMA career are often something to behold, but Julian Erosa may just have some of the most drastic. After going 1-4 in the UFC over two stints, which includes time of The Ultimate Fighter, Erosa was released for the second time. It looked as if he may never get his chance back on the big show until the need for a late replacement just happened to get him one more chance. Now, after submitting highly touted prospect Sean Woodson and following that up with a flying knee KO of Nate Landwehr, Erosa is storming up the featherweight division. He talked to Gumby about this entire wild ride and the mindset change that helped to bring it all about. Plus, he digs into his UFC Vegas 29 match up with Seung Woo Choi.

Another big week for the boys last week, with their parlay of the week hitting in a big way. They recap a little of last week’s action, but then get you to what you really want to hear – previews of this upcoming card. They got the picks for you. They’ve got an underdog for you. And, oh yeah, they got a parlay for you. Make sure to tune in for it all because there are some big numbers next to some of these names, which mean big stuff in your wallet.

This week’s episode closes with an interview with Aleksa Camur. He discusses how just plain old curiosity got him into the sport, and his first fight hooked him for good. He also talks about being a prospect and taking that first loss, what he did to respond and the mindset it takes. Plus, he gets into his UFC Vegas 29 matchup with Nicolae Negumereanu and how you prep for a guy who hasn’t fought in years.