After a booking between Paul Craig and Jamahal Hill fell through earlier this year, the light heavyweight duo were back at UFC 263. Kicking off Saturday’s PPV card in front of a packed house in Glendale, AZ, Craig was playing the role of gatekeeper, while Hill was looking to up his stock in a division now ruled by Jan Blachowicz.

With the exit of names like Jon Jones and Daniel Cormier, 205lbs was ready for some fresh blood. There was just one problem: On Saturday, Craig was too much for Hill to get past. Actually, two problems: he wrecked Hill’s arm in a wince-inducing sequence.

The first few minute of the fight was a feeling out process with both men exchanging the occasional kick. When Hill eventually became a bit more aggressive, Craig tied up immediately and fell to guard. He threatened a Mir lock to start and then another. In the transition out of the position, Craig appeared to dislocate (if not downright break) Hill’s arm and then locked up a triangle choke. The ref, however, didn’t seem to realize what had happened. Hill was frantically waving his free hand, but Craig was forced to finish up with elbows.

Paul Craig with the brutal submission on Jamahal Hill pic.twitter.com/G06aC8OmAM

As a result, what should have been a technical submission win for Craig was announced as a TKO. 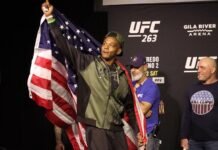