The lone newcomer on the UFC 263 card on Saturday was LFA veteran Terrance McKinney. Stepping in for Frank Camacho, forced out due to a car accident, McKinney was up against “The Steamrolla” otherwise known as Matt Frevola.

Despite the short-notice nature of the fight, at least on paper, Frevola vs. McKinney was both competitive and promising.

Well, promising anyway. As for competitive, the debuting McKinney didn’t really give Frevola a chance. The lightweight fight was over before you blinked, frankly.

The fight started with a touch of the gloves. Right away McKinney landed a one-two (right-left) flooring Frevola. Both punches connected flush. Frevola instantly hit the ground hard. Some extra shots by McKinney sent the ref in with only seven seconds on the clock. The fourth-fastest knockout in UFC history. Well, that’s a memorable way to debut.

What a debut from Terrance McKinney! #UFC263 pic.twitter.com/dJrXCD8pCg

If the tale ended there, you’d have the feel-good story of the night. But as McKinney scaled the octagon to celebrate. And when he landed, he landed hard, appearing to blow out his knee. At the top of the world just minutes earlier, McKinney had to be held up to take a few celebratory post fight photos.

Still, an incredible debut from Terrance McKinney. The highlight clip is basically the entire fight. 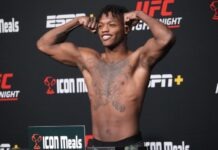 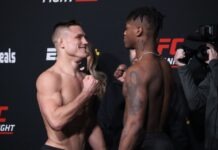