Following Ben Askren, Bellator MMA and ONE Championship welterweight champ, Belfort (26-14, 1NC) is making the jump on June 19. He won’t be taking on anything close to a trained boxer — instead, he’ll face popular social media personality “The Real Tarzann” Mike Holston.

The boxing match-up also means that Belfort has parted ways with ONE Championship, who signed the veteran fighter in 2019. That, without ever having fought for the promotion. During a virtual media day to promote his Triller bout, Belfort opened up about what happened — and suggested that he and ONE simply couldn’t get a fight booked with an opponent all agreed on.

“They could not close the fight. My agent, Lloyd, was trying to close many fights. For some reason, their agenda, my agenda, we could not consolidate it,” explained Belfort. “My contract came to an end, and Chatri [Sityodtong, ONE Championship Chairman and CEO] is a nice guy, a good friend of mine. He said ‘Vitor, we cannot find you a fight.’ You know, this pandemic hit, it was pretty crazy. And I think it just didn’t align, what they’re doing with what I wanted to do.”

The same day he spoke to Sityodtong, revealed Belfort, the boxing opportunity with Triller Fight Club arose. “I spoke to him, and kind of the same day, it appeared, this opportunity. The opportunity was amazing.”

It wasn’t the first time he’d been offered a shot in the boxing realm. “In the year 2000, I was supposed to migrate to boxing. This lawyer had million dollar contracts, he wanted [me] to leave MMA to go box,” said Belfort. “Boxing being my bread and butter. I brought boxing to UFC. If they had let me do MMA and boxing together, I would do it. But I had to choose one, and back at the time, my dream was to make MMA big, and I did that. And now it’s kind of migrating to this next phase.”

Belfort did go on to take a single boxing match in 2006. In his native Brazil, Belfort knocked out Josemario Neves within a round. What his happening now, however, Belfort sees as a shift in the fight game.

“I’m really excited with what Triller’s doing. I think they’re shifting how combat sports is migrating. I believe soon we’re going to have a [hybridization] between boxers and MMA guys, to see who has the best hands,” he said.

Of course, Triller has its share of detractors. Shoddy matchmaking and abysmal pacing to their events are among the criticisms. The prospect of sitting through a long card, however, doesn’t phase Belfort. “I come from a totally different background. I’m a ready guy,” he told Cageside Press. “I don’t believe in anything else, just being in the moment. You can only control what you can control. So I don’t need that much time, just following what to do, and do it. That’s it. It’s very simple.” 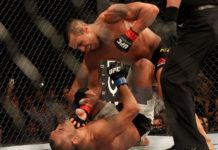 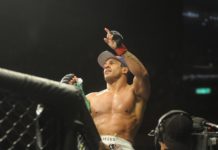