Triller Fight Club’s Askren vs. Paul PPV boxing event is in the books. For those somehow unaware, Youtube celebrity Jake Paul opted to take a boxing match with Ben Askren, widely regarded as one of the best wrestlers in MMA history.

It went about as you would expect in a pure boxing match. Askren, who never had much to offer on the feet, was finished early. Knocked down by a wild overhand, with the ref waving the fight off despite Askren appearing ready to continue.

What the ref said after the knockdown:

On how the blow compared to what he endured in the Robblie Lawler fight:

“I don’t really feel any pain, but I guess it caused me to fall down, so that’s not good.”

On the level of ridicule that’s incoming:

“I probably deserve it. I got knocked out by Jake Paul. That’s f*cking embarrassing.”

How nervous he was ahead of the fight, in comparison to MMA:

“I wasn’t nervous at all, because at the end of the day, my life doesn’t change, one way or the other. In MMA, I was always pursuing or defending a world title, really. Today, I was doing a fun boxing match, and if it turned out great, great, and if it turned out sh*t, my life is the same. So there were really no nerves whatsoever.”

Was it true about Tekashi69 wanting to walk him out for the fight?

“That is true. Then Tyron [Woodley] and two people after him said ‘no way, Jose.'”

“I’m just going to continue with my life as it was, podcasting and coaching. That’s kind of what I told you guys I was going to do. It is unfortunate, I really did think I could do better. Yeah, that was not fun.” 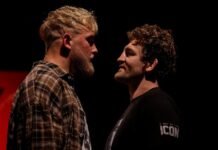