On Tuesday, promotion officials announced via press release that Tofiq Musaev (18-3) will return following an 18-month layoff to take on Roberto Satoshi Souza (11-1). Musaev, the promotion’s lightweight grand prix winner in 2019 (defeating Patricky Pitbull in the finale), has posted a 5-0 record in the Japanese organization. Souza, a star grappler, is 4-1 under the RIZIN banner, with all four wins coming via stoppage.

Additional fights were also announced Tuesday. In one, featherweight champ Yutaka Saito (19-4-2) will face Vugar Karamov (15-3) in a non-title bout. While not the most familiar name, Karamov is a teammate of Tofiq Musaev. Also in action on the card will be heavyweight and former sumo wrestler Tsuyoshi Sudario (3-0), who has been booked opposite Shoma Shibisai (6-2, 1NC).

The current RIZIN 28 card breaks down as follows:

In addition to the bout announcements, RIZIN officials also confirmed Tuesday that elbow strikes will now be part of the standard ruleset. Previously, elbows were only allowed in bouts where both opponents agreed to their inclusion. The new rule includes an allowance for 12-6 elbows, so long as they are used on legal areas of the body.

The use of vaseline, previously prohibited by RIZIN, will now be allowed, and is to be applied by officials “before the fight and in between rounds.” 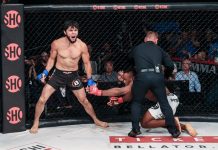