While she has her own BKFC bout against Rachael Ostovich pending, Paige VanZant will take a night off to provide her services on-air for Jorge Masvidal’s Gamebred FC.

Billed as a bare-knuckle MMA promotion, Gamebred FC makes its debut on June 18, with Jason Knight vs. Charles Bennett in the main event. VanZant, who made her (unsuccessful) bare-knuckle boxing debut earlier this year, is one of a handful of fighters with experience in both MMA and BKB.

Fight Bananas was first to report that VanZant would be joining Bellator alum Sean Wheelock and American Top Team owner Dan Lambert on the Gamebred FC broadcast. The event airs via the BKFC TV app.

This isn’t VanZant’s first foray into broadcasting. In 2019, she was announced as part of M-1 Global’s English-Langue commentary team. She also worked commentary for the Kinetic grappling event that same year.

VanZant soared to fame upon debuting in the UFC in 2014, immediately building a three-fight win streak. She stumbled against future champ Rose Namajunas, and went 2-4 across her last six fights for a 5-4 record inside the octagon overall. Last year, following a loss to Amanda Ribas and a high profile spat over pay with the promotion, VanZant made the jump over to Bare Knuckle FC.

“12 Gauge” became a crossover darling during her run with the UFC, appearing on Dancing with the Stars, Chopped, and numerous other endeavors, while also releasing a biography in 2018. The 27-year old is married to top Bellator middleweight Austin Vanderford. 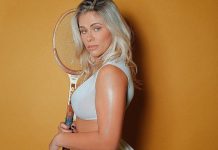