The 2021 edition of Dana White’s Contender Series continues to grow, with the latest addition being Chad Anheliger vs. Muin Gafurov on September 7. Sources familiar with the booking recently confirmed the bout to Cageside Press.

Chad Anheliger hails from Calgary, Alberta in Canada. The 34-year-old will finally get his shot for a UFC contract in the fight, after being in the sport for nearly a decade. It’s an impressive turnaround for the “The Monster,” as at one point in his career in 2014 Anheliger was 2-5. Taking a break away from competition for a year he came back and since has been undefeated at 8-0 and now sits at 10-5 overall.

Anheliger has competed as bantamweight, flyweight, and catchweight. In his last three fights, he won both the Rise FC flyweight and bantamweight titles. He went on to defend his bantamweight title in his most recent fight. The Canadian has been on the shelf for a bit, not having fought in over a year. Anheliger was supposed to fight last March but contracted COVID-19 and had to pull out.

Looking to stop the dreams of Anheliger is Muin Gafurov from Tajikistan. Gafurov, with an impressive record of 17-3, has been in MMA since 2013. Only 26, he came into MMA as a combat sambo specialist.

Even though his latest win came in January for UAE Warriors, Gafurov is best known for his time in ONE Championship. His fight with well-known fighter and former UFC athlete John Lineker put more eyes on him even in defeat. He also fought for ACB once in 2017. Gafurov is 6-1 in his last seven fights with a key win over former UFC fighter Leandro Issa. 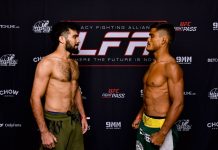 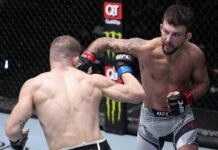