The UFC matchmakers knew exactly what they were doing with this welterweight matchup. Entertainment and violence.

AGSports first reported the news that Niko Price and Michel Pereira will fight on July 10 at UFC 264. The UFC would announce the fight a few hours later.

Price (14-4) was on the first fight card when the UFC resumed after the sports world went dark in 2020, rematching Vicente Luque. He would lose the fight via doctor stoppage in a very entertaining fight. “The Hybrid” would return four months later in the co-main event of UFC Fight Night: Covington vs. Woodley fighting Donald Cerrone. The pair would fight to a majority draw. The result would be overturned to a no-contest due to a failed drug test for Price — stemming from marijuana. He was suspended for six months.

After losing two of his first three fights in the UFC, Pereira (25-11-2) bounced back in the second half of 2020. The Brazilain would submit Zelim Imadaev and be awarded Performance of the Night. On the last card of the year, Pereira would defeat Khaos Williams, snapping his opponent’s eight-fight win streak.

With both men allergic to boring fights, this fight has Fight of the Night written all over it.

UFC 264 will take place at T-Mobile Arena in Las Vegas and headlined by Conor McGregor and Dustin Poirier.

With the latest addition, UFC 264 card looks like this: 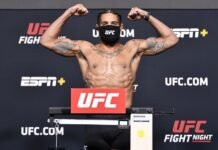 Max Griffin vs. Carlos Condit Lined Up for UFC 264