The Fight Gods are fickle beings.

Less than a week out from UFC Vegas 28 (UFC Fight Night 189), and the event has lost not one, not two, but three contests.

Arguably the most significant, the anticipated strawweight showdown between Angela Hill and Amanda Ribas is one victim. This marks the second time the fight has been postponed, as the pair had been expected to meet on May 8. However, with Ribas contracting COVID-19 and suffering the associated symptoms, the bout was pulled the day of the event.

Things apparently aren’t much better, as Ribas’ struggle with the coronavirus is once again behind her removal from UFC Vegas 28.

Per a report by MMA Junkie, however, with Ribas out, Hill will not remain on the card.

Also without a dance partner for UFC Vegas 28 is Dusko Todorovic. That news was announced during this past week’s UFC Vegas 27 broadcast. Original opponent Maki Pitolo has been forced out of the event, for undisclosed reasons. As it stands, Canadian CFFC middleweight champion Aaron Jeffery has offered his services against Todorovic.

Jeffery had been expected to appear on Dana White’s Contender Series later this year. No official announcement has been made regarding the bout.

Finally, Nate Landwehr is out of his bout with Makwan Amirkhani at UFC Vegas 28 this coming Saturday. Amirkhani himself revealed the news on social media. “Hoping someone will take on the match on June 5th. Nate is out. Wishing him a speedy recovery from injury,” he wrote. 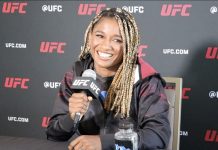 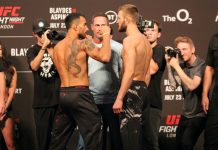