Rob Font ended UFC Vegas 27 on a good note with a one-sided performance against Cody Garbrandt in the main event.

New England Mafia team member Rob Font was headed into the biggest fight of his career Saturday night. Not just because “the next fight is always the biggest,” but because he was throwing down with former UFC bantamweight champion Cody Garbrandt.

Font, with three straight wins under his belt, could secure his spot as a contender with a win over the ex-champ. Garbrandt, coming off a highlight reel knockout win over Raphael Assuncao, could jump right back in the mix with a strong showing of his own.

Cody Garbrandt started the fight with a strong leg kick that had Font off balance temporarily. From there, a feeling-out process began as both men attempted to find their range. Font then closed in and got a hold of Garbrandt with a Thai clinch and delivered a knee to the body. There was an exchange of hooks that led to a scramble, then both fighters returned to the center of the Octagon. Font pressed forward and landed a front kick, then quickly moved forward, where he was taken down by Garbrandt. Font got up and then landed a slew of punches before getting taken down again. Font was able to get back to his feet before the round came to a close.

Font landed a body kick early on, then Garbrandt went low with a kick and blasted forward with a successful double-leg takedown. Garbrandt passed the guard, then Font successfully executed a kimura sweep to return to his feet. On the feet, Font was finding plenty of success with long punches. The jab of Font settled in, as he was able to avoid a takedown for an extended period of time. He kept Garbrandt at bay until a late takedown attempt, which he successfully avoided.

A right straight connected for Font right away and he began pumping the jab behind it. Font landed a combination and caused Garbrandt to stagger backward. A counter right landed and forced Garbrandt to shoot for a takedown, which Font avoided by slipping the attempt and turning it into an advantageous clinch of his own. Font was able to sweep Garbrandt off his feet and land a few shots before Garbrandt scrambled to his feet. Font avoided a takedown and the fighters began exchanging jabs as the fight was visibly taking a toll on Garbrandt.

Font picked up the pace in the fourth round, mixing a head kick in with his jabs that were consistently finding the mark. A slick body-body-head combo connected for Font as Garbrandt’s offensive output dwindled. A big right hand and a few jabs landed for Font, followed by a head kick from in close. Font was pouring it on as the takedown was no longer a threat. It looked as if nothing was missing Garbrandt’s chin as Font was landing jab after jab.

Garbrandt landed a few shots out of the gate in the final round, but Font was still in control. He landed jabs at will and staggered Garbrandt with a counter-right hand. Font continued to keep the jab in Garbrandt’s face as he did not have an answer for it. An overhand right did land for Garbrandt with two minutes left, but nothing came of it. Font landed a sweep to get Garbrandt on his back temporarily, then stunned him with a big right hand. Font mixed it up with a few combinations toward the end, but pulled guard right before the round came to a close after eating a big shot. 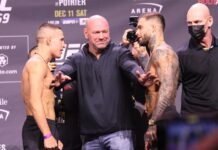 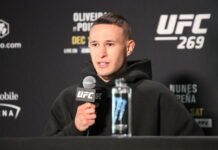