Colbey Northcutt returns to action this Wednesday night at ONE on TNT IV, making the walk to what is now known as the ONE circle for the second time.

Northcutt (1-1) is a flyweight prospect from a fighting family. Brother Sage shot to stardom in the UFC; husband Raymond Daniels has transitioned from a world champion kickboxer to a mixed martial artist competing for Bellator.

Having a life partner that also fully understands and is part of the combat sports world, “it’s fantastic,” Northcutt told Cageside Press during the ONE on TNT IV media day this week. “It’s something that, I can’t actually describe how great it really is. He’s my partner in life, but also my training partner as well. We do everything together. We run a business together, we train together, everything’s together. It’s great that I have somebody who not only supports me and pushes me, but understands what I’m going through and does it themselves.”

In Singapore for her fight against Courtney Martin, Daniels is her lone cornerman. “There’s not too many fighters that can say they have their spouses as their one corner, that they would trust fully, 100% with all their training and everything like that,” she observed. “It’s something that you can’t really describe how great it is, and I’m really grateful for it.”

In an interesting bit of scheduling, Daniels himself fought for Bellator a little less than two weeks ago. “This is the first time that we’ve been in a camp together, and I actually really love it. Because, it’s funny, fighters, when you’re in a camp, you’re very strict, you’re very serious about your sleep, your training, your recovery, your diet.” Having one half of the couple in camp and the other not, explained Northcutt, leaves on a little bit more flexible, and the other a little bit more moody. “It’s nice to be going through it together, because it takes the pressure off of both of us, and we help each other out too.”

“This has been fantastic. And I am glad he fought first, because I get extremely nervous for him,” she continued. Of course, Daniels gets equally nervous if not more so when his wife fights. How nervous? Northcutt shared a story from her ONE Championship debut that makes it clear as day.

“My last fight, my ONE debut, I’ll go and tell this to people because I think it’s hilarious now — My opponent, Putri Padmi, she’s already in the ring, they’re announcing my name, I’m about to walk out and open the curtains up,” recalled Northcutt. “[Raymond]’s so nervous pacing behind me as I am getting my name called, he goes and throws up right on the floor right beside me, when I’m about to walk out.

“I’m seeing him throw up on the floor, and I’m thinking to myself ‘gosh that doesn’t make me feel any better about what I’m about to go do.’ So yes, he gets more nervous for me than I do for him.”

The nerves might never go away, but hopefully, there will be no vomit Wednesday night. In the meantime, Northcutt is now focused on Courtney Martin, after Sovannahry Em was forced out of the fight a few weeks back.

“I’m very very happy that ONE Championship was able to find me an opponent, that Courtney stepped up and said ‘yeah I want to fight,'” Northcutt stated. “Not too many people would do that such short notice, but I do understand the magnitude of this card. It’s a great opportunity for both of us.”

Of course, there will be adjustments. “Everybody is a little bit different stylistically. Whether they’re more of a kickboxer, grappler, whatever. That being said, I’m still going to be me no matter what. And I’m still going to use my advantages and attributes in this fight, and I would do that for anybody.”

“Yes, I got an opponent change, but that doesn’t mean the game plan changes,” she added.

That switch in opponents has led to a crash course on Courtney, taking in whatever video is available on the amateur fighter who turns pro this Wednesday. “She’s extremely tough, very durable, likes to go forward, is aggressive, and is very well rounded in every area. Some submissions, some knockouts, finishes, decisions, everything. From what I’ve seen, her amateur record is 8-1, 9-1, something like that. And she is a GAMMA world champ. So I’m not taking her lightly whatsoever. Courtney’s tough.”

Watch the full ONE on TNT IV media day interview with Colbey Northcutt above. The event takes place Wednesday, April 28, with the main card airing live on TNT starting at 10PM ET. 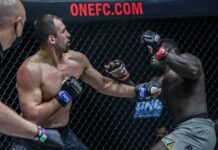