After a DQ finish (later overturned to a No Contest) earlier this month, Eddie Alvarez returned to the ONE circle Wednesday at ONE on TNT IV. There, he had a second chance to make a big impression on TNT, as he took on South Korea’s Ok Rae Yoon.

The potential of a title shot hung in the balance. Though nothing was set in stone, promotion Chairman and CEO Chatri Sityodtong had suggested during Fight Week that a big performance could earn Alvarez a shot at Christian Lee.

With the fight underway on Wednesday, Ok worked low kicks early, but that played into Alvarez’s game. “The Underground King” grabbed a leg — an ankle, actually — and quickly took Ok down. The South Korean popped right back up, but Alvarez was able to tie him up. While Alvarez was winning the grappling battles, Ok had the edge on the feet. In an exchange, Ok dropped Alvarez! The right hand felled him, and it looked like Alvarez was out. Ok Rae Yoon went in for the kill, but Alvarez managed to defend just enough to survive, while eating several more blows, including some nasty hammer fists.

With Alvarez somehow surviving the round, he started the second working his jab. He’d then look for a takedown, to no avail. After a brief exchange, Alvarez did get Ok down, pulling the legs out from under his opponent. But Ok was right back up. The takedown defense of Ok was the story of the fight through the first two rounds — outside of the knockdown and near finish in the opening frame, anyway.

The third round saw Alvarez sticking to the game plan, changing levels and securing the takedown. But again, while a little slower in the final five minutes, Ok was able to pop back up. In the next exchange, Ok rocked Alvarez, but didn’t follow up. Instead, Alvarez regrouped and landed a pair of body shots, before again dropping for a takedown that wasn’t there. In the final minute, Alvarez would turn up the heat, going high with a kick, landing upstairs with a left, and a straight right. Another hook followed. It was a battle to the bell, but for Alvarez, after getting out to a slow start, he just couldn’t catch up. 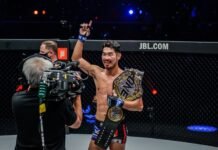