Jessica Andrade, in her third weight class inside the confines of the UFC, is looking to claim her second world championship at UFC 261.

The former UFC strawweight champion, who previously competed as a bantamweight, arrived at flyweight last year. She instantly shook up the weight class with a violent TKO of ex-title challenger Katlyn Chookagian. Now, she’s up against a dominant champion in Valentina Shevchenko.

“This Saturday I’m going to do my best,” Brazil’s Andrade stated at this week’s UFC 261 media day. “It’s a big chance for me to put a big stamp on my legacy. And not just for me, for my whole team and for everybody that’s been working with me for so long.”

Through four title defenses, and all of her flyweight fights, no one has been able to figure out champ Valentina Shevchenko. Asked about the dominant champ, “Bate Estaca” suggested that “a lot of opponents get in there with Valentina and they are already respecting her way too much. They might be afraid of her because of her history and everything she’s done.”

In how own case, said Andrade, “as much respect that I have for her outside, once the door closes, there will be no respect for her. I’m going to be in her face the entire time, and you can expect five rounds of pressure.”

“I believe in myself, I know my potential, and I believe I can make it a fight,” she finished. 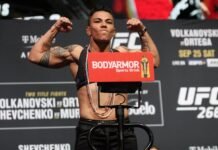