Clay Collard has been saddled with the task of welcoming Anthony Pettis to the PFL later this week.

Of course, Collard is also making his own promotional debut at 2021’s PFL 1 card, and with the loss of the 2020 season due to the coronavirus pandemic, he’s been waiting roughly two years to step into the Professional Fighters League cage.

“I’m chomping at the bit to get in the cage,” Collard said during this week’s PFL 1 media day. In recent times, Collard has dabbled in boxing, but “I’m a much better fighter and I’m more creative when I can throw more than just my hands.”

He’ll get the opportunity to do just that shortly. Collard, like Pettis, is a former UFC athlete, one who once shared the cage with featherweight great Max Holloway. That’s a fight he’d love back someday, albeit not at 145lbs, now that he’s an established lightweight. But for now, it’s another former UFC champ he’s focused on.

“We’ve ran into each other in the hall. [Pettis]’s walking around here like he owns the place,” opined Collard. “What can you do.”

Asked to expand on precisely what he meant, Collard seemed to imply there was a bit of a celebrity angle. “Just, people wanting to take pictures with him. The guy just gives that [vibe] off. That’s just what I see.” Collard isn’t bothered by it, however. “Not a while lot bothers me. I’m just ready to fight.”

In fact, Clay Collard actually asked to fight Pettis right out of the gate, he told Cageside Press on Tuesday. “I was actually very excited. I was telling all the people I’m in touch with at PFL that I wanted him or the champ Natan [Schulte] first,” he stated. “I like fighting the tough guys if you don’t know that yet.”

The underdog status — Collard has been as high as a +600 or so ahead of the bout — doesn’t bother him either. “If you know anything about me, you know I like being the underdog. Go ahead and count me out. I love proving everybody wrong.”

Still, Collard reiterated, “he’s got to get past me first.”

Touching on his recent boxing experience, Collard also noted that “I feel like that year of boxing did nothing but better my all-around fight game. I never stopped training mixed martial arts, I just got some different looks and I fought people with hands like boxers. I think it helped me out tremendously, boxing for that year.” 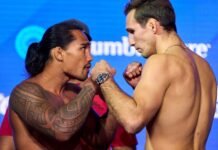 PFL 7: Clay Collard Feels He’s Finally Getting The Respect He Deserves Ahead Of Playoffs