UFC officials announced the opponent switch in a press release Tuesday, after Cutelaba revealed on social media that his opponent had changed.

Clark reportedly withdrew from the bout due to an unspecified injury.

Moldova’s Cutelaba will enter the bout looking to halt a two-fight skid, with both losses coming to a single opponent: Magomed Ankalaev. The pair’s rivalry was sparked at UFC Norfolk in February 2020, thanks to an early stoppage that handed Ankalaev a controversial TKO finish. That resulted in the UFC booking a rare immediate rematch, which the coronavirus pandemic then pushed back several times.

When the rematch finally did arrive at UFC 254 last October, the end result wasn’t much different: Cutelaba was knocked out in the opening round.

Overall, Cutelaba is 3-3 across his last six fights.

Stepping in on short notice, meanwhile, Dustin Jacoby will look to build on a four fight win streak, with two of those victories coming inside the UFC octagon. Jacoby is on his second stint with the promotion, and has looked like a new fighter since winning his way back on Dana White’s Contender Series.

The May 1 card is headlined by another light heavyweight pairing: Dominick Reyes vs. Jiri Prochazka. 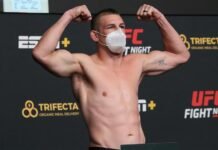