Being on the wrong end of a quick, highlight-reel knockout is never fun for a fighter. Nor is sitting and waiting for your chance to wipe the slate clean and get back in the win column. For Gerald Meerschaert, come UFC Vegas 24, it had been seven long months since his knockout loss to Khamzat Chimaev last year. Opposite him Saturday, Bartosz Fabinski, looking to bounce back from his own loss to Andre Muniz, a submission loss that took place just weeks before Meerschaert’s own defeat.

Meerschaert started the fight with a quick left hand in the preliminary card bout Saturday. Fabinski fired back with some punches. After a wild exchange from both fighters, Meerschaert put Fabinski against the fence. Fabinski reversed and landed a nasty knee to Meerschaert’s body. Fabinski went for a takedown and Meerschaert dropped to the floor with a guillotine locked up. Meerschaert went to his side and managed to get the guillotine even tighter. Fabinski didn’t tap, instead going to sleep. Meerschaert is known for his guillotine and got another submission win — he now has 24 submission wins at that. And the record for the UFC’s middleweight division.

It was a fantastic bounce-back win for Meerschaert, who was on a two-fight skid. He’s also about to become a father, making the win the icing on the cake. Fabinski is now on a two-fight losing streak — the first of his career. 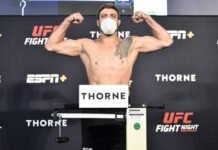