One of the UFC’s breakout stars of 2020, Khamzat Chimaev has finally returned to training after a lengthy battle with COVID-19.

In a statement to MMA Junkie, Chimaev’s manager, Dominance MMA’s Ali Abdelaziz, told the site that Chimaev had returned to the gym several days ago — while mentioning an unspecified medical procedure the fighter underwent.

“He had a procedure,” Abdelaziz told the site in an interview published on Monday. “Actually, his first day of training was three days ago. He’s coming back with a vengeance, man. He has so much to prove. He was the guy main-eventing. Guess what? COVID rules the world right now, and COVID got him. You see Alexander [Volkanovski], the [UFC] featherweight champion. I hope he’s OK. He had some problems with it. Khamzat had some problems with it. Now he’s 100 percent healthy. He’s back training this week or last week.”

Predicting a comeback in late July or August, the manager added that when it comes to Chimaev, “He’s going to keep climbing. He’s a special talent. He’s a superstar, I believe, in the making. ”

Chimaev burst on the UFC scene last year, immediately setting a record for the fastest turnaround time between wins in promotion history. After those two victories just ten days apart (against John Phillips and Rhys McKee) in July, the AllStars Gym team member returned in September, knocking out Gerald Meerschaert in all of 17 seconds.

Juggling weight classes — both middleweight and welterweight — Chimaev was then booked into a high-profile match-up with Leon Edwards at the end of the year. However, first Edwards, then Chimaev, was pulled from the fight due to each contracting COVID-19. After the bout was moved around a couple of times, Edwards wound up fighting Belal Muhammad last month.

Meanwhile, Chimaev struggled with COVID-19 symptoms, reportedly coughing up blood and at one point signalling his retirement. Based on his manager’s statement, however, things are clearly looking up. 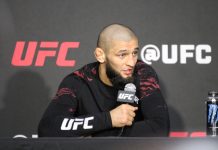