ONE Championship’s debut on U.S. network television has come and gone. Earlier this week, ONE on TNT 1 saw the return of top names like Eddie Alvarez, Demetrious Johnson, and heavyweight prospect Oumar Kane.

But outside of Kane, who steamrolled a clearly outmatched Patrick Schmid, it was a rough night for the promotion’s biggest stars.

Alvarez, in particular, was the center of controversy after landing multiple illegal strikes to the back of opponent Iuri Lapicus’ head. While “The Underground King” protested that the blows were legal, replay showed that they were not. Lapicus was taken to hospital, and was stable, but the damage was done. A rough start to ONE’s tenure on TNT. Alvarez was handed a red card and DQ’d.

Adriano Moraes vs. Demetrious Johnson was a better fight — especially if you were Moraes. The Brazilian flyweight champ, with a noticeable size advantage over “Mighty Mouse,” cracked Johhnson in the second round. After Johnson went down, Moraes caught him with a knee on the way up. Illegal under the Unified Rules of MMA, perfectly legal under ONE’s ruleset. Johnson, for the first time in his illustrious career, was stopped. As were his chances of a second major title.

In the end, it was Rodtang who stole the show. Western audiences may not know or case about Rodtang Jitmuangnon, but he absolutely pieced up Daniel Williams in the evening’s Muay Thai main event. A solid way to end the night.

Highlights from ONE on TNT 1 as well as full results can be found below.

ONE on TNT 1 Full Results 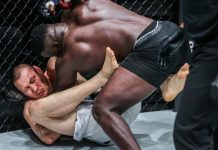