Meng Bo (17-5) is one of the more experienced fighters set to compete in ONE Championship’s upcoming atomweight grand prix. Kicking off on May 28 at the all-female Empower card, Bo has been paired up with a standout wrestler in India’s Ritu Phogat.

China’s Bo, competing as a professional since 2013, has seen plenty of opponents come and go. Few are likely to have won gold medals in the Commonwealth Games, as Phogat did in freestyle wrestling. But Bo wasn’t ready to deem Phogat the toughest wrestler she’s been booked against, she told Cageside Press during a recent virtual media day promoting the grand prix.

“I could tell she’s a strong opponent from watching her past fights. But we haven’t faced each other yet. Anything could happen when we face each other, said Bo. That said, she has most certainly been working on stuffing those takedowns.

“Yes, of course. I started my training camp already, and I’ve been working on takedown defense and defense back behind the circle,” admitted Bo.

Like many, if not all, of the grand prix competitors, Meng Bo has big plans, big dreams ahead, and she is certain that she can reach them. “I have 100% confidence in winning this grand prix,” said Bo during the Empower media day. “Because my ultimate goal is not just to win the grand prix belt. My ultimate goal is to beat Angela Lee and get the world championship belt.”

Champ Lee is currently taking time off from fighting to start her family. But she will be awaiting the winner of the atomweight grand prix down the road.

Watch the full ONE Championship: Empower virtual media day with Meng Bo above. 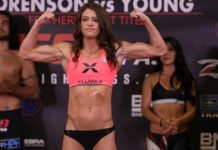 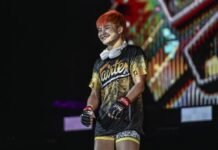 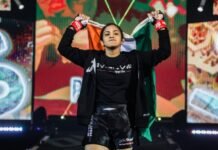