On May 28 at Bellator 259, Cyborg will meet Leslie Smith in a rematch of their 2016 UFC meeting. The fight will be the champion’s second title defense inside the Bellator cage — the fourth major promotion in which she has worn gold (the others being Strikeforce, Invicta FC, and the UFC).

The fight was announced during the Bellator 255 broadcast on Friday, with champ and challenger both in attendance.

Coming off just a single win, it might seem like an odd booking for Smith to be getting a title shot. That’s a question Cyborg addressed backstage on Friday, speaking to media outlets including Cageside Press.

“She’s getting better, she’s getting wins, and when you’re getting wins, you’re supposed to fight for the title,” Cyborg said of the booking. While there were a few other options out there, including former UFC star Cat Zingano, Smith has been plugging away in Bellator for a couple of fights now.

“The champion’s not supposed to choose their opponent, just be ready for the next in line,” the Brazilian later added.

As for Smith’s suggestion that it’s the loser of a fight who trains harder for the rematch, “I’m always training with the blue gloves, because in my mind, I’m contender number one,” said Cyborg. “I never have in my mind that I’m the champion.”

Over the past year, Bellator’s featherweight division has continued to grow, while rival UFC has allowed their own 145lb weight class to become Amanda Nunes’ playground, with no real division built around her. Recently, former Invicta FC champ Megan Anderson was allowed to exit the Ultimate Fighting Championship. A future with Bellator seems inevitable.

“I don’t have the names, but I want all the girls to fight for Bellator,” said Cyborg. “We have the real [featherweight] division, and I want to my legacy [to be that] we had the division at 145 pounds. When I stop fighting, it’s going to continue growing.”

Watch the full Bellator 255 media scrum with Cris Cyborg above. 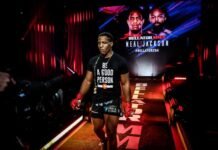 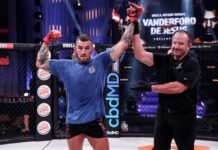 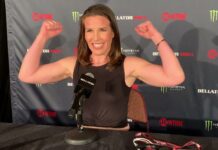