UFC 260 may have been short on the total number of fights, but it certainly wasn’t short on excitement. All 10 fights delivered a high level of action and the medical suspensions demonstrate exactly that. 16 of the 20 fighters on the card face some level of layoff, with five getting the standard maximum of 180 days off.

Among the fighters getting the big layoff is Jamie Mullarkey. Despite winning in just 46 seconds on Saturday against a tough Khama Worthy, Mullarkey appeared to do some damage to his right hand and wrist. As a result, he’ll have to wait six months before getting the chance to follow up on that amazing knockout. He, like all of the fighters with long layoffs, can have that suspension shortened with doctor’s clearance.

The other fighters facing 180 days off include Gillian Robertson, who injured her hand in a unanimous decision loss to Miranda Maverick; Fabio Cherant, who suffered an injury to his ribs prior to tapping to a von flue choke; and both Omar Morales and Shane Young, who fought one another. Both Morales and Young appeared to have sustained leg injuries. They will all have the same opportunity as Mullarkey to have their suspensions shortened if they can get the requisite doctor’s clearance.

The full list of UFC 260 medical suspensions is as follows: 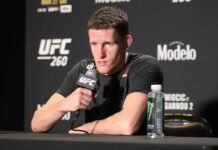 UFC 260: Jamie Mullarkey Looking to Make Up for Lost Time