The fourth man to execute a Von Flue choke in UFC history was also the fastest to execute it. And he admitted post fight, speaking to media outlets including Cageside Press, that he has studied Ovince Saint Preux to master it.

“I basically studied that guy, and I got that OSP choke. I think I got it down. Down-down,” he stated, adding that he’d been working on it all the way back in 2007, when he was starting out. OSP, of course, was the man who popularized the submission.

Aside from the finish, Menifield’s night Saturday was memorable for another reason: he appeared to diss his own mother in a post-fight interview with Joe Rogan.

“First of all I’d like to thank my wife. You showed me love love like no other. My mom hasn’t even shown me love as much as my wife has,” Menifield said live on ESPN.

“Everybody’s going to be happy about what you just said except your mom,” replied Joe Rogan. Likely echoing the sentiments of many.

Menifield expanded on the comments backstage at the UFC Apex. Asked what he would say to his mom, Menifield said “I love you mom,” before opening up. “As far as that, my wife has loved me more than what you’ve shown me. I appreciate that you raised me and fed me, but at a time my mom, sad to say, wasn’t in my life. She should have been there, and she wasn’t. My wife should have left me, and she said ‘you know what, I’m going to stick it out. Love this man.’ And she did, and that’s why I’m right for her. That’s why I gave her praise.” 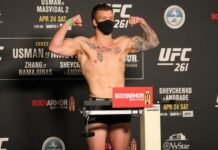 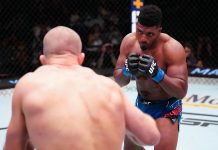