Our Prospect Watch takes us back to Brazil, where we take a closer look at lightweight up-and-comer Mairon Santos — an undefeated teammate of former UFC strawweight champ Jessica Andrade.

Santos is at his absolute best while on the feet. What sets Santos apart is that he’s constantly switching it up. Santos never throws the same strike twice in a row. His combination always starts off different. He’ll throw a jab to the body followed by an inside leg kick, he’ll throw a head kick to a step in knee, he’ll throw a spinning kick to the body and then to the head- just as an example. Santos just does a fantastic job putting it all together and definitely keeps his opponents guessing. He’s also very comfortable letting his opponents be the aggressor then slipping punches and countering. While Santos is more technical he likes to use a lot of spinning techniques and flying knees.

Santos has a Muay Thai background so in the clinch, he’s completely comfortable. Offensively he’s good with knees, short strikes, and controlling the posture. Defensively he’s good at fighting wrists by digging for under hooks. I’d like to see him be a bit more active but he’s definitely well-equipped there.

Like his striking, he’s good at letting the opponent come forward, with Santos then capitalizing. Santos does solid work having guys walk him down and using their forward momentum to create easy takedowns from Santos. He also does a good job striking to wresting getting his opponent guard up high and him shooting on the legs.
Grappling: B-
Santos doesn’t initiate the grappling as much but when he does he’s effective. A lot of times Santos will stay calm, ride out in the guard, and land short ground and pound strikes. He doesn’t hold any submission victories but he has at least attacked them. To get takedowns and solidify position-winning minutes of rounds is what you can count on Santos for.
Cardio: A
If Santos isn’t stopping the fight with his hands he will take you to the scorecards, going the distance five-times. Santos has only finished the fight in the first round four times so that does say something about his endurance. Watching Santos compete he never shows any signs of slowing down. As the fight goes he becomes just as dangerous and arguably more comfortable.
Defense: B-
Defensively his grappling defense is suspect, and he can be flat-footed. Although there are some iffy tendencies and questions, he’s still undefeated and has performed nearly flawlessly. The few moments I’ve seen him on his back he seems to have trouble getting out from underneath. He’ll attack with submissions but has still never secured one. Due to his style, he will plant his feet often and that can allow guys to get off shots on his while he’s stationary.
Overall: A-
Santos comes out of Paraná Vale Tudo, the home of Jessica Adrade and a slew of young fighters like Santos. “A Lenda” has had a few “easier” fights but has beat records like a 7-1, 5-0, 7-3, and another 7-1. He’s been built up perfectly and is a Brazilian that has both an impressive and legit undefeated record. Overall, there may be a few concerns but has performed as perfectly as possible. Santos is such a big threat on the feet. He has the speed, the explosiveness, the decision-making, and the power just to list a few of what he brings to the table. If his superb striking/kickboxing isn’t enough he’s an intelligent wrestler as well. Santos can fight all three rounds kickboxing or wrestling but in the end, he usually mixes it up. Watch out for this kid because he’s the real deal. 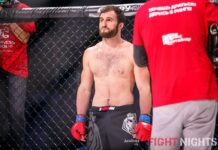 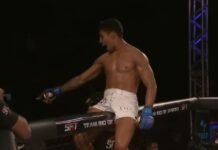 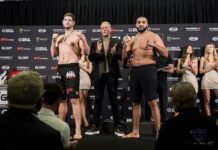