A pair of top Bellator lightweights will finally fight after being rebooked.

MMA Fighting was first to report the news that Patricky Freire will make his Bellator MMA return against Peter Queally at Bellator 258 on May 7. The pair were scheduled to headline Bellator Dublin 2 on October 3, 2020, however, a hand injury forced Queally to pull out of the fight. Freire was scheduled to Jaleel Willis two weeks later, but that fight was canceled as well.

Both fighters have since confirmed the new booking via social media.

Freire (23-9) represented Bellator during the RIZIN Lightweight Grand Prix in 2019, and fought three times, making it all the way to the finals. The older “Pitbull” knocked out Tatsuya Kawajiri with a flying knee in the quarter-finals and then knocked out Luiz Gustavo in 28 seconds in the semi-finals. On the same night that he knocked out Gustavo, he would lose a unanimous decision to Tofiq Musayev in the finals on New Years Eve 2019.

Queally (12-5-1) last fought in 2019 as well. The Irish fighter finished Ryan Scope at Bellator 227. Seven months prior, he would lose a split decision to Myles Price. Queally was scheduled to fight former Bellator lightweight champion Brent Primus last February, but an injury forced him to withdraw.

Bellator 258 will take place at the Mohegan Sun Arena and will be available on Showtime. 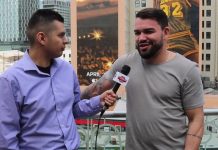