Itsuki Hirata brings her undefeated 8-0 record to the ONE Championship women’s atomweight grand prix later this year. And the Japanese prospect is thrilled to have the opportunity.

“Finally, I made it to the grand prix,” Hirtata said via translator during a media day earlier this week promoting the tournament. The action kicks off on May 28, part of the all-female Empower card.

A lot of eyes will be on Hirata, who at just 21-years old is the “baby” of the tournament. Still, there’s a feeling that Hirata could go far in the sport. “A lot of people feel [I] can make it to the top,” acknowledged Hirata, who added that the pressure “changes to motivation.”

Heading into the grand prix, “on one side, [I’m] representing Japan,” Hirata noted. And, she added, “there’s things that only young people can do. [I want] to show that in the grand prix, and definitely go for the belt.”

Hirata has been paired up with Alyse Anderson in the quarterfinals, a former Invicta FC fighter making her ONE Championship debut. “Alyse, she’s tall, and has a long reach. Probably it’s the first time I’m facing that kind of athlete,” said Hirata. “So it’ll definitely be a tough one. She has very good striking and very good grappling.” With that said, the plan is to “go to the ground and finish her.” 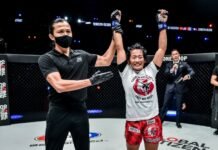