Tai Tuivasa gets to stay on this weekend’s UFC Vegas 22 card after all.

Tuivasa will fight Harry Hunsucker at the UFC Fight Night event (numerically UFC on ESPN 21) on short notice as his original opponent, Don’Tale Mayes, pulled out of their fight. MMA Junkie was the first to report the new fight, with both Hunsucker and official UFC broadcaster ESPN later confirming it.

Tuivasa (10-3) got a much-needed win in his last time out, as he was essentially fighting for his job last fall. He defeated Stefan Struve at UFC 254 in October on ‘Fight Island via a first-round knockout. “Bam Bam” was on a three-fight losing streak before his most recent win, losing to Junior Dos Santos, Blagoy Ivanov, and Sergey Spivak.

Hunsucker (7-3) will step in on three-days notice to make his UFC debut. Hunsucker was just in action 18 days ago as he defended his HR MMA heavyweight title by knocking out Cory Moon. The Kentucky native had a chance at UFC contract on last season of Dana White’s Contender Series; he would lose via knockout to Jared Vanderaa.

With the late minute switch up, UFC Vegas 22 now looks like this: 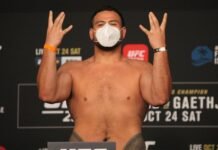