Impa Kasanganay is set to make his return to the octagon on April 10 against Sasha Palatnikov, but when we see him, he will be in a new weight class; welterweight. He will also be with a new team, Sanford MMA.

For his entire professional career so far, Kasanganay has fought at middleweight. But when the news came out that he was fighting Palatnikov, it meant one thing: a new weight class.

“It’s always been something that has been tossed in the air, but never really happened until now,” Kasanganay said to Cageside Press about dropping down to 170 lbs.

He was at practice, and his coach asked him what he thought about welterweight.

“I had talked about it before, and we played with the idea, you know, thought about it. And then another day [at practice], I was standing next to Phil Hawes, and Anthony Johnson and my coach goes ‘look a welterweight, a middleweight, and light heavyweight I was like, actually, I’m a middleweight, and he was like ‘uh-huh..yeah.'”

“I was like, you know what I want the challenge. My goal is to do something that has never been done before and do something special. Why not get the 170, 180, 205, and heavyweight title as my career grows. I was like, maybe that’s God opening up this door.”

Kasanganay feels good so far, dropping from middleweight to welterweight, and says for his next fight, he will consult the UFC Performance Institute — as well as for future weight cuts.

On top of dropping a weight class, Impa Kasanganay moved his family from North Carolina to Florida as he left Gym-O and joined Sanford MMA, which was actually a recommendation from his old coach at Gym-O.

“I needed more training partners consistently and just needed to train more. That’s what brought me here,” Kasanganay said. “At Sanford, you get it everyday, different looks, different people, wisdom, knowledge, just people who are striving to get the best version of themselves out there. It’s awesome.”

Of course, the last time we saw Kasaganay in the UFC octagon, he was brutally knocked out by a stunning kick delivered by Joaquin Buckley.

The consensus ‘Knockout of the Year‘ did not hold Kasaganay down and did not mentally affect him.

“It made me better, I did not like the fact that I lost, but I thought it was an opportunity to get better,” Kasaganay said. “Mentally, it just challenged me, like how am I going to respond, what am I going to be from this, who do I become now. It was a cool moment. It wasn’t cool as far as losing, but the lessons are cool, the person I am being – I’m loving.”

“It didn’t destroy me, it challenged me to be the best version of myself.”

As for his opponent Palatnikov, he plans to finish him.

Kasangany vs. Palatnikov goes down on April 10 in what is the UFC’s return to ABC.

Check out the rest of the interview above, where Kasangany talks about his nickname, his training partners, and more. 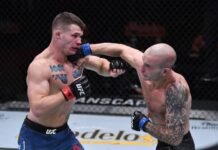